For the 2019/20 late Fall Chinook Salmon it was decided that we would broadcast news of the salmon’s return with a Community Meeting and a Monitoring Program to build awareness. Our kick-off meeting in early November was well attended with over 100. Teams were organized and walks initiated along over a dozen stretches of the Watershed. I’d like to thank all the people who supported our monitoring, video documentation, and cleanups this year. It is a testament to what a small group can accomplish in spite of large obstacles. 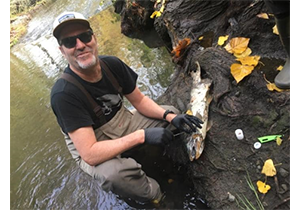 As we began to see fish arriving in the lower Guadalupe near Mineta Airport work to clear fish barriers in the regular spots upstream commenced. Much of the movement of these fish was tied to storm water pulses which triggered the fish to move upstream. So by late November, we had roughly 60-70 Chinook in Los Gatos Creek from Park Ave to Campbell Ave. Fish on the main stem of the Guadalupe near BassPro took a bit longer to arrive but we saw 30-40 fish here as well. In an effort to better understand these fish, SBCCC is working with CDFW providing the heads of hatchery fish with 9 harvested for analysis. We also have 11 fish samples of possible non-hatchery fish which we will be sending up to UC Davis for testing.

A complete map of the spawning activity for both last year's Fall run and this current years Fall run can be found in our Interactive Maps. Access it here.

Previous Runs of Our Chinook Salmon 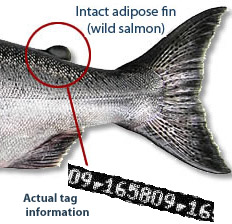 Starting in 2014, we secured a permit through CDFW to examine the carcasses of salmon as a means of supporting their data collection on hatchery fish. We were also authorized to take fin samples from fish that had an adipose fin to determine their origin by using DNA testing. Initial testing of the 2016 fish recovered showed they were hatchery fish introduced into the wild in San Pablo Bay, Santa Cruz harbor and Half Moon Bay harbor.

During the Fall of 2017 and going until Winter 2018, SBCCC launched a monitoring program bringing together over 30 volunteers, which included our local Flycasters of San Jose. The group was trained on identification of REDD’s and on how to tag sites with GPS coordinates. All of the data created went into a database to create the living map. We have captured pictures and videos documenting the late fall-run of the Chinook salmon throughout the Guadalupe watershed with over 300 volunteer hours.