One of the most notable of our wildlife successes is the reintroduction of beavers on the Los Gatos Creek.

On March 26th, 2013, Roger Castillo and Steve Holmes were doing a creek survey near the confluence of the Los Gatos Creek and the Guadalupe River, when they spotted what appeared to be evidence of a tree gnawed by a beaver --and that is exactly what it turned out to be.

Roger Castillo and Founder Steve Holmes, had found not one but three beavers in our local waterways. Read the full account on the Urban Wildlife Research Project website. 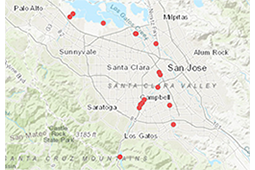 Since that early find, the beaver have created homes in a number of areas by the Bay and in waterways along the Los Gatos Creek, Coyote Creek and Guadalupe River. What a wonder it is to see these animals right in our urban environment.

You can see the locations of their dams in more detail  on this ArcGIS map.

The Background on Their Re-introduction Here

After the initial sightings in 2013, we started seeing the beaver spread out and move upstream on the Guadalupe River and up into the Los Gatos Creek. However, with the start of the drought in 2014, evidence of the hardships the beaver faced was made apparent as major sections of the Guadalupe River dried up which sadly led to the discovery of the skeletons of the beaver.

Fortunately, conditions in the Los Gatos Creek proved to be ideal with no interruptions in water flow and an abundance of plant life to sustain their herbivore needs. Our next encounter with the beaver came in February 2014, after one of our TEAM 222 Cleanups when telltale signs that beaver had settled in a stretch near Campbell were discovered. We installed a trail camera and were able to capture some great videos of our elusive beaver.


As quick as they were located and filmed, they just as quickly disappeared into the recesses of the Creek and remained there undisturbed by the urban setting they had chosen as their home. Our next encounter was in the spring of 2017 when we heard from some of our Facebook followers that the beavers were once again active. That Facebook lead led to us to conduct a survey where we were able to capture this awesome footage and subsequently discovered a beaver dam and a new addition to their family that we estimated to be in the 6-7 beavers. The news of a new kit (baby beaver) was all over local TV channels and newspapers, which led to a, “Name that Beaver” campaign that comically led to the new name of Justin Beaver.

We know that all of the Cleanup work we have conducted over the past five years has in part had something to do with these beavers ability to remain and prosper in our local waterways.